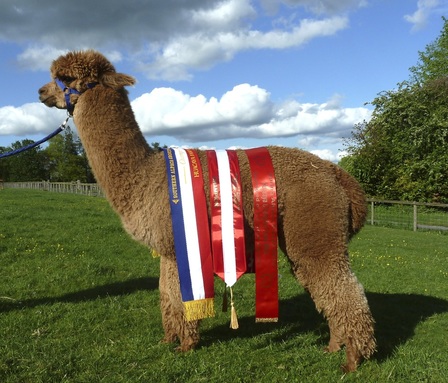 Son of the multi Championship winning CME Tulaco Centurion, out of Meon Valley Bon Bon, daughter of Supreme Champion Meon Valley Bonita. Bonami has matured into a very handsome macho, with excellent substance and presence. His fleece is super-dense, fine and very soft handling, with a very well organised, high frequency crimp style which continues into his legs and neck. The winner of 13 broad ribbons to date and the recent winner of Champion Fawn Male at 2014 Alpaca Showtime Judged by Peter Kennedy from Australia. and he was Champion Adult Male at the 2013 BAS Nationals, above many superb white males.